I will be presenting the text mining project on the Pokémon Sword and Shield Twitter community that I previously introduced a few weeks ago at this year’s CSDH/SCHN conference on June 5th. Academic associations are facing the challenge of quickly adapting their summer conferences to a format suitable for online exchanges in the context of the ongoing epidemic. This involves, amongst other things, less time dedicated to formal presentations and more emphasis on questions, which is, in my opinion, the most beneficiary part of the whole process. I am looking forward to hearing about new developments in digital scholarship, and discussing future avenues for the analysis of our database.

Meanwhile, you can access the conference paper on Humanities Commons, and a visualization of our Twitter corpus on Tableau public.

The CFP for the next Replaying Japan conference is out. This time, the event will be held at the Strong Museum of Play in Rochester (USA), and will be themed around the concept of “Transmedia and Story in Japanese Games”. Here is the call for paper, which you can also find at the official conference webpage.

If you are interested in Japanese video game studies and you are based in North America, please consider sending an abstract (in either English or Japanese).

“Transmedia and Story in Japanese Games”

The 5th International Conference on Japan Game Studies will be held at The Strong National Museum of Play, Rochester, USA, from August 21 to 23 2017.

Proposals in Japanese are most welcome! <日本語での発表要旨も受け付けます。>
This conference, co-hosted by The Strong and Rochester Institute of Technology’s School of Interactive Games and Media and MAGIC Center, is organized in collaboration with the Institute of East Asian Studies at Leipzig University, the Ritsumeikan Center for Game Studies, the University of Alberta and DiGRA Japan. This conference, the fifth collaboratively organized event, focuses broadly on Japanese game culture, education, and industry. It aims to bring together a wide range of researchers and creators from many different countries to present and exchange their work.

The main theme of the conference this year will be Transmedia and Story in Japanese Games.

We invite researchers and students to submit paper proposals related to this theme. We also invite papers on other topics relating to games, game culture, education, and the Japanese game industry from the perspectives of humanities, social sciences, business, or education. We also encourage poster/demonstration proposals of games or interactive projects related to these themes. For previous approaches related to these topics, see the 2016 program:http://home.uni-leipzig.de/jgames/replayingjapan2016/program/.

Please send anonymized abstracts of no more than 500 words in English or Japanese via email to <replayingjapan@gmail.com> before January 15, 2017. Figures, tables and references, which do not count towards the 500 words, may be included on a second page. The following information should be in the accompanying email message:

Notification of acceptance will be sent out by March 3, 2017.
While the language of this conference will be English, limited communication assistance will be available for those who cannot present in English.

For more information about Replaying Japan 2017, visit the conference home page (replaying.jp) or write to replayingjapan@gmail.com.

Games of our Lives: Pac-Man

I am attending Replaying Japan 2016 held in Lepzig at the moment. This year, the conference puts emphasis on Pac-Man, Toru Iwatani’s legendary arcade video game from 1981. While I won’t be speaking directly about the game this year (my paper is about JRPG instead), I still wanted to express a few of my memories and thoughts about this important game. There is no better platform that this blog to communicate these ideas to the attendants of the conference, but also beyond to anyone interested.

When I was around 10 years old, my parents sent me to summer camp in a remote corner of rural Quebec, probably as a way to get some vacations of their own, but also to broaden my horizons beyond the monotonous everyday life of June-July-August vacation time period as a kid. There, we would do all kinds of activities, playing in the woods, at the lake or playing variations of Dungeons and Dragons. There was also a crafting session taking place in a shed in the middle of the woods, and I remember trying my hand at a papier-mâché workshop where kids had to come up with a project involving a round wireframe structure around which we had to creatively put the said piece of paper-mâché around, hopefully turning out into a ball/head structure. I ended up making a spherical structure, on which I put two eyes and a big mouth. When I declared the project done, the workshop supervisor walked towards me and said: “Oh, you made a Pac-Man!”. A what? I cannot remember the color of the whole thing, but let us say for the purpose of this story that it was a big yellow.

Of course being born in 1986, the post Pac-Man era, I had no idea what character that person was referring, and, by 1996 or so, Pac-Man was no longer a household figure. The Pac-Man fever had come and go a long time ago. I was living in Gaspésie, and had virtually no access to video games, and, besides, the killer app of the NES was the more fledged out Mario Bros. I remember, however, that eventually we inherited from a Colecovision console form my grandmother, and one of the cartridge would turn out to be the famous porting of Pac-Man, the Colecovision’s own killer app over the Atari 2600, of which the Pac-Man port was a disastrous mess. I had no idea of what Pac-Man was at the time, but it soon slowly creeped into my life.

So the fever had come and go, but in its wake, it left of an entire generation with a rough understanding of what video games were, but most importantly, a familiar face. Pac-Man’s success was to reach a new layer of people to engage with video games for the first time. While Nishikado captured the space-themed zeitgeist of the late 1970s through Space Invaders, Iwatani created its own by providing gamers with a very different ludic metaphor, one that was easy to understand for anyone, anywhere.

The game was popular in Japan, but it was in the United States that the game turned into a form of culture of its own brought forward by an endless amount of paraphernalia produced for fans wanting to bring home the spirit of the game. This was certainly instrumental into turning Pac-Man into the recognizable figure that it is still today. It amazes me that my first contact with Pac-Man was not with the game itself, but through its character that I “copy” in an art project in a cabin in the Gaspésie woods.

The question now become to what extend is Pac-Man still influencing game culture these days? What does Pac-Man mean to the younger generation now that Pac-Man is featured in many other games which often have nothing to do with the original game gameplay-wise. I am thinking of Super Smash Bros for example. We might not come up with all answers at this year’s conference, but I hope the event will trigger the community to ponder on these issues in years to come.

Posted in chirashi database, conference, Français, tools for the humanities

I attended the 2016 edition of the Mechademia Conference in Tokyo last week-end. It was a great occasion to hear some great papers on manga and anime that I know very little of. I also had the chance to meet various important people of the Japanese cultural scene. One of them was the venerable critic Hiroshi Deguchi, researcher at the Tokyo Institute of Technology and long-time member of the Comic Market organizational committee. I took some note during his keynote address entitled “Japanese Manga and Cultural Diversity”. 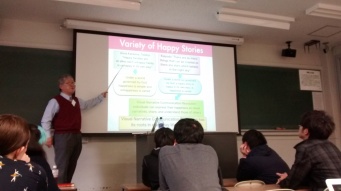 Mr. Deguchi’s talk demonstrated how the world of manga is providing diversity in the form of alternative “life world” narratives that challenges traditional notions such as family or gender roles. However, these narratives are not produced by artists working within the mainstream manga culture, but from the fringes often associated with the otaku subculture. Otaku culture, therefore, is interpreted as resolutely post-modern in the way it encourages self-expression and the quest for individual happiness unbounded by any “arbiters of meaning”.

It is here that his talk took an interesting turn. Mr. Deguchi’s other important point was to establish that the representatives of high culture, those who usually shun the seemingly derivative subcultural productions, are supporting a hierarchical system that is “artificial” within the Japanese context. Mr. Deguchi demonstrated how Japanese visual culture in the Edo period was characterized by some of the aspects that are usually associated to Japanese dôjin culture such as the heavy emphasis on mundane subject matters and eroticism. It is only after Western cultural standards started permeating the Japanese cultural landscape in the 20th century that a distinction between high and low art was established. Referencing Walter Benjamin’s concept of the “aura” of a work of art, Mr. Deguchi stated that in the case of dôjin derivative works, there is no question wether an “aura” is present or not within a reproduced work (print or otherwise), rather, the “aura” is to be found within the dôjin activity itself. In other words, in the production itself. That “aura” is defined by a sense of belonging to a community of like-minded people who create derivative work for the pleasure of engaging within a community.

Mr. Deguchi’s association of post-modern subculture and traditional Edo visual culture as a way to legitimize otaku productions and situate them as the contemporary embodiment of the “real” Japanese culture is not completely new as far as I know. I remember a similar argument made by Murakami Takashi within the theoretical groundings of the Superflat movement by linking Ukiyo-e aesthetics and contemporary animation. However, what Mr. Deguchi’s talk made more explicit was the how the diversity of narratives created by fringe manga artists is directly in line with current sensibilities regarding representation politics.

In itself, this interpretation bridges with Western academia in an interesting fashion. It is true that some of the examples provided during the talk put emphasis on how queer life worlds and non-normative life styles can be represented in positive way within fringe subculture, but I can foresee the limits of this discourse for foreign intellectuals. Japan is often the object of criticism due to its tolerance of manga featuring sexual violence (of any kind), and, more recently, such criticism came from the UN directly. The question of whether this judgement is legitimate or not is still up in the air and, in Japan, the UN’s report is itself being denounced. It seems that diversity and representation politics are often challenging concepts to negotiate between Western countries and Japan. I am looking forward to see how academics will address the subject in years to come.

Public Talk at RCGS on March 11

I will be giving a talk about my thesis project during the last week of my stay at Ritsumeikan on March 11. This presentation will be part of the ongoing conference series that RCGS hosts regularly to showcase new research in game studies. I will present a summary of my research objectives as well as some case studies of arcade video games that require an understanding of interactive games as the synergy of software, cabinet and space.

This will be my very first official public talk in Japanese and, needless to say, this is making me very nervous. I will spend the next week brushing my vocabulary up so that won’t have to rely on English too much.